I will not explain about wireless security and WPA/WEP. You can read AirSnort is another popular wireless LAN password cracking tool. It can crack . It is free to use and is available for Windows, MAC and Linux. Download.
Table of contents

An optional active deauthentication attack can be used to speed up the reconnaissance process and is described at the end of this document. 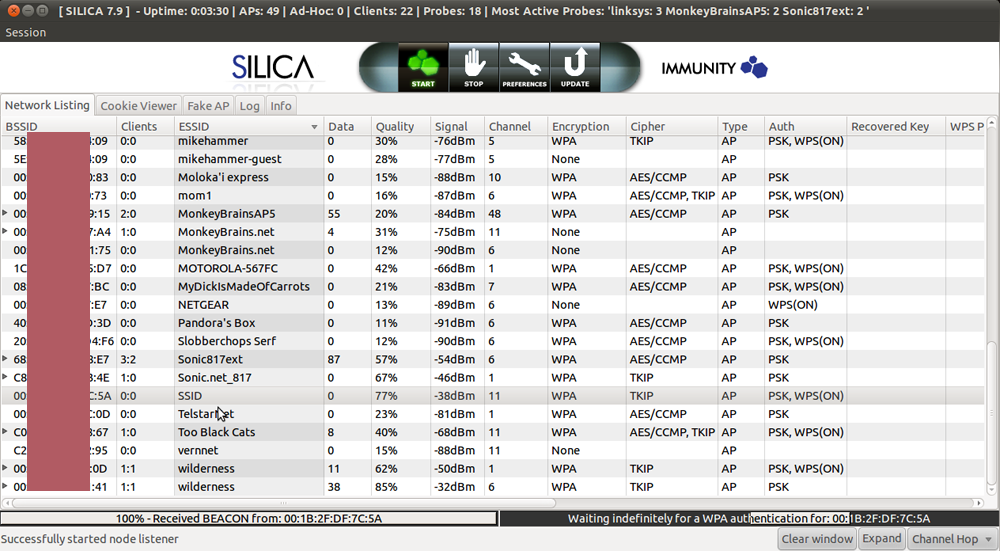 If you are familiar with this process, you can skip the descriptions and jump to a list of the commands used at the bottom. For a variety of suggestions and alternative methods, see the appendix. It should not be used for illegal activity. The author is not responsible for its use. Don't be a dick. We will assume your wireless interface name is wlan0 but be sure to use the correct name if it differs from this. Next, we will place the interface into monitor mode:.

Run iwconfig. You should now see a new monitor mode interface listed likely mon0 or wlan0mon. Start listening to For the purposes of this demo, we will choose to crack the password of my network, "hackme".


You don't have to know anything about what that means, but you do have to capture one of these handshakes in order to crack the network password. These handshakes occur whenever a device connects to the network, for instance, when your neighbor returns home from work.

We capture this handshake by directing airmon-ng to monitor traffic on the target network using the channel and bssid values discovered from the previous command. Now we wait Once you've captured a handshake, you should see something like [ WPA handshake: bc:d3:c9:ef:d at the top right of the screen, just right of the current time. If you are feeling impatient, and are comfortable using an active attack, you can force devices connected to the target network to reconnect, be sending malicious deauthentication packets at them. This often results in the capture of a 4-way handshake.

See the deauth attack section below for info on this. Once you've captured a handshake, press ctrl-c to quit airodump-ng. You should see a. We will use this capture file to crack the network password. I like to rename this file to reflect the network name we are trying to crack:. The final step is to crack the password using the captured handshake.

I've created a simple tool that makes hashcat super easy to use called naive-hashcat. You can also try your hand at CPU cracking with Aircrack-ng. Weak Initial values combinations do not encrypt sufficiently. WEP is based on passwords; this makes it vulnerable to dictionary attacks.

It is used to encrypt data on It uses temporal keys to encrypt packets. WPA Weaknesses The collision avoidance implementation can be broken It is vulnerable to denial of service attacks Pre-shares keys use passphrases. Weak passphrases are vulnerable to dictionary attacks.


How to Crack Wireless Networks WEP cracking Cracking is the process of exploiting security weaknesses in wireless networks and gaining unauthorized access. There are basically two types of cracks namely; Passive cracking — this type of cracking has no effect on the network traffic until the WEP security has been cracked. It is difficult to detect. Active cracking — this type of attack has an increased load effect on the network traffic. It is easy to detect compared to passive cracking.

It is more effective compared to passive cracking. It is an implementation of the FMS attack.

Wifi Pineapple - How To Steal Your Neighbors WIFI Password (WPA)

Denial of Service Attack — the main intent of this attack is to deny legitimate users network resources. FataJack can be used to perform this type of attack. Doing so requires software and hardware resources, and patience.

What is a WPA attack?

The success of such attacks can also depend on how active and inactive the users of the target network are. We will provide you with basic information that can help you get started. Use JamWiFi. A ready-to-use application is provided there. Once you have selected the access point, you can deauth one or multiple users. It might not work it you are too far from the target as your airport card is far less powerful than the router. Using airport presents some issues. You cannot know if you got the beacon and the handshake until you stop the capture and try with aircrack-ng.

When you launch those lines, the first tcpdump easily captures a beacon and the second waits for the handshake. It appears you can use less that 4 frames, but it depends on the frames you got for instance 1,2 or 2,3 are sufficient. Anyway you should normally get at least 4.